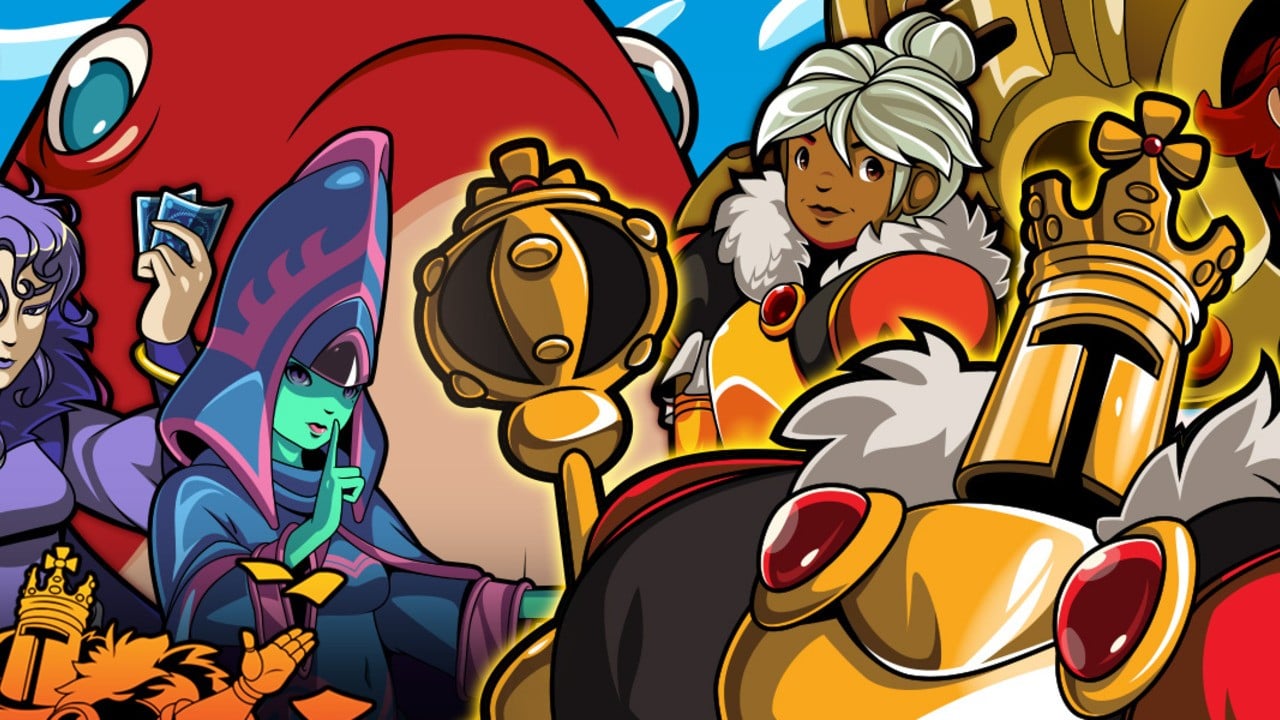 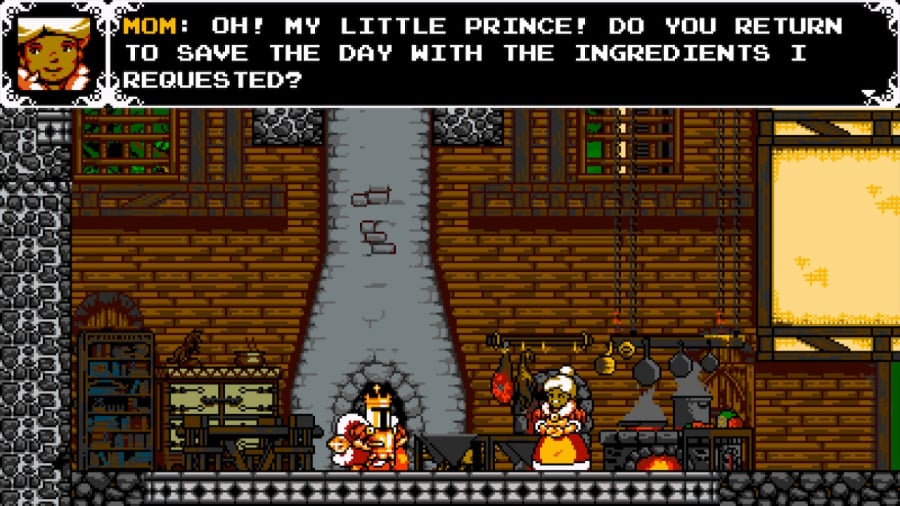 Nearly seven years ago, Yacht Club Games launched the Kickstarter for Shovel Knight, thus beginning the long journey towards building one of the most recognizable characters in the indie gaming space. After a record-breaking response from the community, not only did the game receive the funding it needed, but all the stretch goals for additional content were also met. Amongst other things, these stretch goals included additional modes in which you could play through the base campaign as one of three of the boss knights. Most developers in this situation would’ve simply added three relatively low effort extra characters to the main game and called it good; Yacht Club decided to swing for the fences instead.

Both the Plague of Shadows and Specter of Torment updates in 2015 and 2017 showcased what could be done when a little more spit and polish was applied to these extra characters. Each campaign was designed as a bespoke adventure for its starring character, complete with fully redesigned levels, new storylines, and various experimental, supplementary game mechanics tossed in to make each release feel in many ways like a sequel to the original 2014 release of Shovel Knight. Now, Yacht Club has finally reached the end of the development road with its latest King of Cards expansion, which easily feels like the most ambitious and expansive campaign yet. The perfect marriage of foundational elements – such as familiar characters and stage themes – with fresh content like the new Joustus card game demonstrates how much the studio has matured over the years, making this the perfect sendoff for a modern classic. 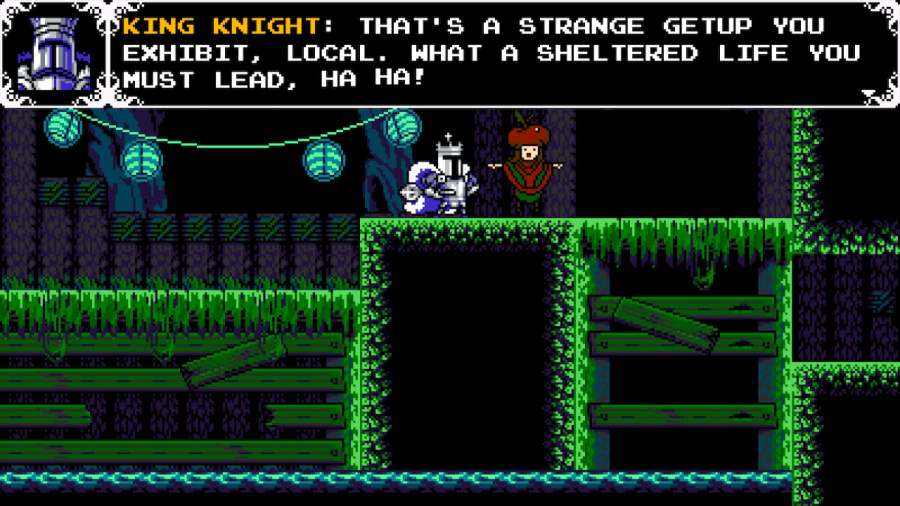 The story of King of Cards takes place a little before the base Shovel Knight campaign, starting off at a time in which the oafish King Knight lives with his mother and his only ‘subjects’ are the rats that scurry around his room. A popular new card-game sensation called Joustus has swept across the land and – echoing a certain monster-catching Nintendo franchise – King Knight has set his sights on becoming the very best by defeating the three Joustus Judges and becoming the titular King of Cards. Right from the off, it’s especially noticeable how this is a much more lighthearted and smaller-stakes adventure than the weighty and sombre tale that drove Specter Knight’s adventure in the last campaign. King Knight is as boisterous and buffoonish as ever, and the writing is spectacular as he interacts with various characters and recruits them to his flying airship base.

As you’d expect, King Knight has a new move set to drive the platforming, all of which centres around his shoulder bash move. A quick button tap will send King Knight ploughing into whatever’s immediately in his path, and once he makes contact with it, he launches upward into a pirouette that functions similarly to Shovel Knight’s downward shovel bounce. This makes for an interesting rhythm with level pacing, as many obstacles require you to chain together multiple dashes and bounces in quick succession, introducing an almost puzzle-like quality to certain segments. At first, this shoulder bash-to-bounce combo can be a little hard to get to grips with, but much like each of the previous characters, it soon becomes second nature as you dance through enemies and careen over high walls. 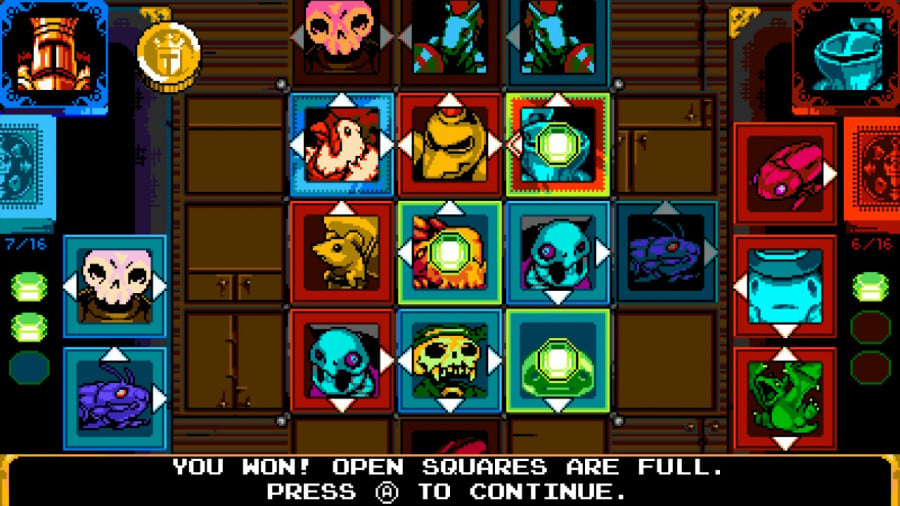 Level design this time around has taken a notable break from the ‘norm’ of previous Shovel Knight campaigns by carving up the levels up into a high number of brief and focused challenges. Previously, levels were long gauntlets with six or so checkpoints and a high number of unique gameplay concepts being tested at once. Here, levels only have one or two checkpoints and are more akin to certain Nintendo platformer releases in which a single gameplay idea is introduced and iterated on throughout the course of that level. We rather enjoyed this revised approach, as it gives each level a more focused and intentional feel while also allowing for the overall campaign to have more variety and memorable moments.

The overworld map designed has been rejigged to be far more non-linear as well, drawing plenty of parallels with Super Mario World. Your goal is to get to the King level at the end of each world, and the path you can take there is entirely up to you. Some stages have secret exits that lead to extra levels, and you can bypass whole areas of a world if you’re crafty in how you plan your route. Of course, boss knights and other optional challenges roam the routes between, and these often act as nice breaks from the core gameplay while also giving you some much-needed cash for upgrades and collectables. In many ways, the design of the map here feels like a perfected version of the map that first showed up in the original Shovel Knight, placing emphasis on player agency while also enticing you with plenty of secrets and alternate paths. 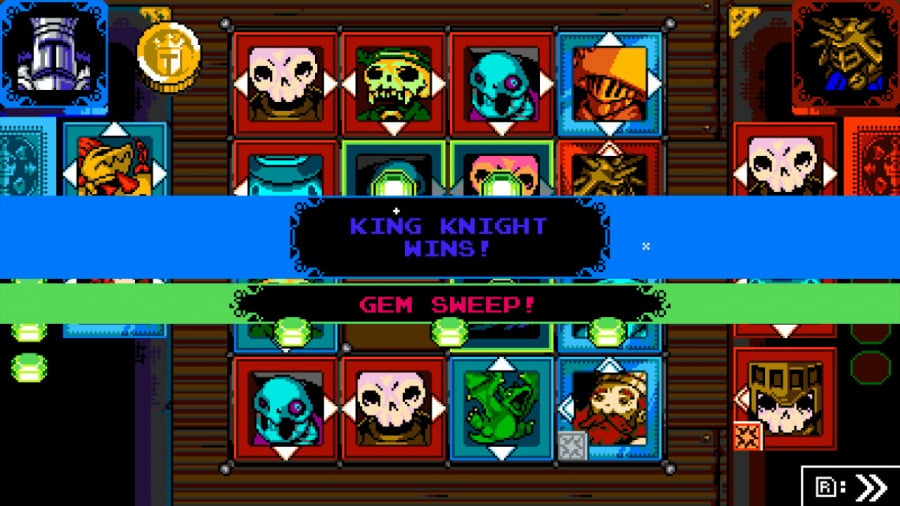 Character progression echoes much of what we’ve seen in previous Shovel Knight campaigns, with your collected gold going towards new outfits and upgrades that help to give you an edge in the more difficult portions of the late game. Along with this, each level has (usually) three collectable Medals that act as a sort of secondary currency which is used to unlock more items for King Knight to use. A bit like in Specter Knight’s campaign, you use these medals to pay for new items, and then run through a brief level that showcases various ways you can use that new thing. We rather appreciated how many of the moves from King Knight’s original boss move set have been repurposed here, and the new additions to his arsenal are organically integrated and give you a diverse toolset for overcoming certain obstacles.

It’d be impossible to complete a review of King of Cards without paying special attention to one of its headlining new features: Joustus. At first, this fun little card game seems like just a cool distraction from the main game, but it quickly reveals itself to have far more depth than you’d think. The basic idea behind Joustus centres around placing cards down on a 5×5 grid and trying to control more gem panels (there’s usually only three) than your opponent. On a standard table, you can only place cards in the nine squares in the centre of the grid, and once the centre fills up, whoever has more gem panels wins. Each card has arrows on it that indicate which way it will ‘push’ other cards, and putting it down will then shove a chosen card over a certain amount of spaces. 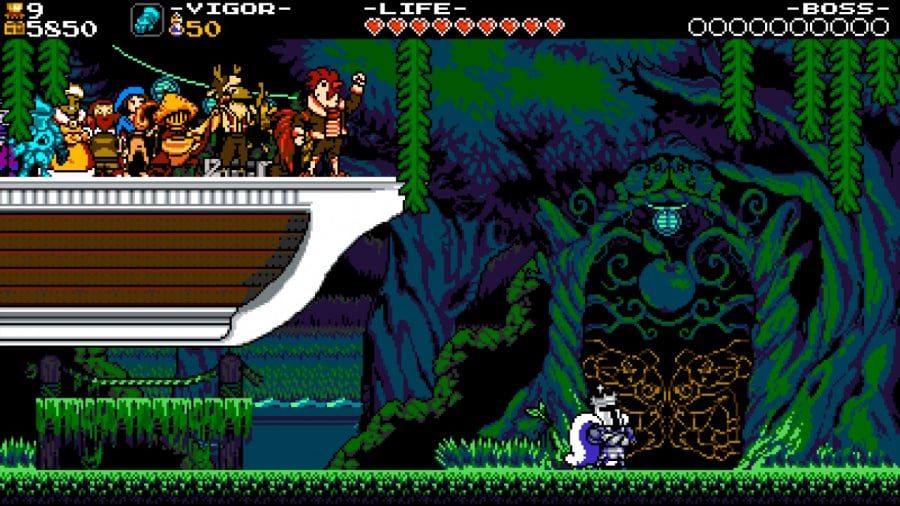 Controlling a desired space on the board often requires a fair amount of planning and thought, as you have to be thinking a couple of moves ahead and play out the possibilities of where your opponent could likely push the cards you place. Things are complicated even further, then, when you factor in that some cards have special properties which can upend the state of the board, such as a card that destroys any cards that it’s pushed into. All of this is to say Joustus is not simply a forgettable diversion that’s tacked on to add more content to the King of Cards expansion; it’s a well-designed mini-game with a high skill ceiling. In fact, when you factor in that there are several dozen cards to collect and loads of characters to play throughout the campaign, you could easily spend as much time playing Joustus as you do platforming as King Knight. Even so, though Joustus proves to be foundational to the identity of King of Cards, it’s never forced on the player. If cards aren’t your thing, you can play through the campaign as a pure 2D platformer and barely touch Joustus, though we would highly encourage you to give it a fair shot.

The overall presentation is perhaps where King of Cards leans most on its predecessors, as the sprite work and soundtrack give off a bit of a ‘been there, done that’ feel. You know what to expect when going to Tinker Knight’s clocktower, for example, and though it is a little disappointing to see the same level themes and enemies used once again, it’s tough to fault Yacht Club for the excellent attention to detail that it’s paid to all the artwork. And though much of the campaign does retread familiar ground, there’s still some new level themes, enemies, and music tracks here to help give King of Cards more of a unique feel. Essentially, King of Cards offers up exactly the kind of presentation that you should come to expect from a Shovel Knight release, and though it does feel kind of tired the fourth time around, this is still a shining example of how to do 8-bit right.

Few would’ve guessed back in 2014 that Shovel Knight would still be going strong with brand new expansions five years later; it truly has been the gift that keeps on giving. King of Cards proves that Yacht Club Games has lost none of the zeal or talent that made the original release such a success, as evidenced by the tight level designs, excellent writing, top-notch presentation, and loads of replayability. It’s tough to say whether King of Cards is the best expansion yet, but it certainly meets the ridiculously high bar set by its predecessors. As a standalone release, King of Cards easily trumps most other retro 2D platformers on the Switch eShop at the moment, and you certainly can’t go wrong by picking it up. That being said, we’d encourage you to buy into the ‘full’ Shovel Knight game and play through each campaign in release order, as you get the most out of King of Cards once you understand the context it’s in from both a gameplay and story perspective. Either way, it’s impossible to go wrong with King of Cards, and whether standalone or as part of Treasure Trove, we’d recommend you make a point to play it as soon as possible. This is likely the last we’ll see of the ‘core’ Shovel Knight series for some time, and King of Cards acts as a worthy swansong for a now-legendary platformer. Bravo.