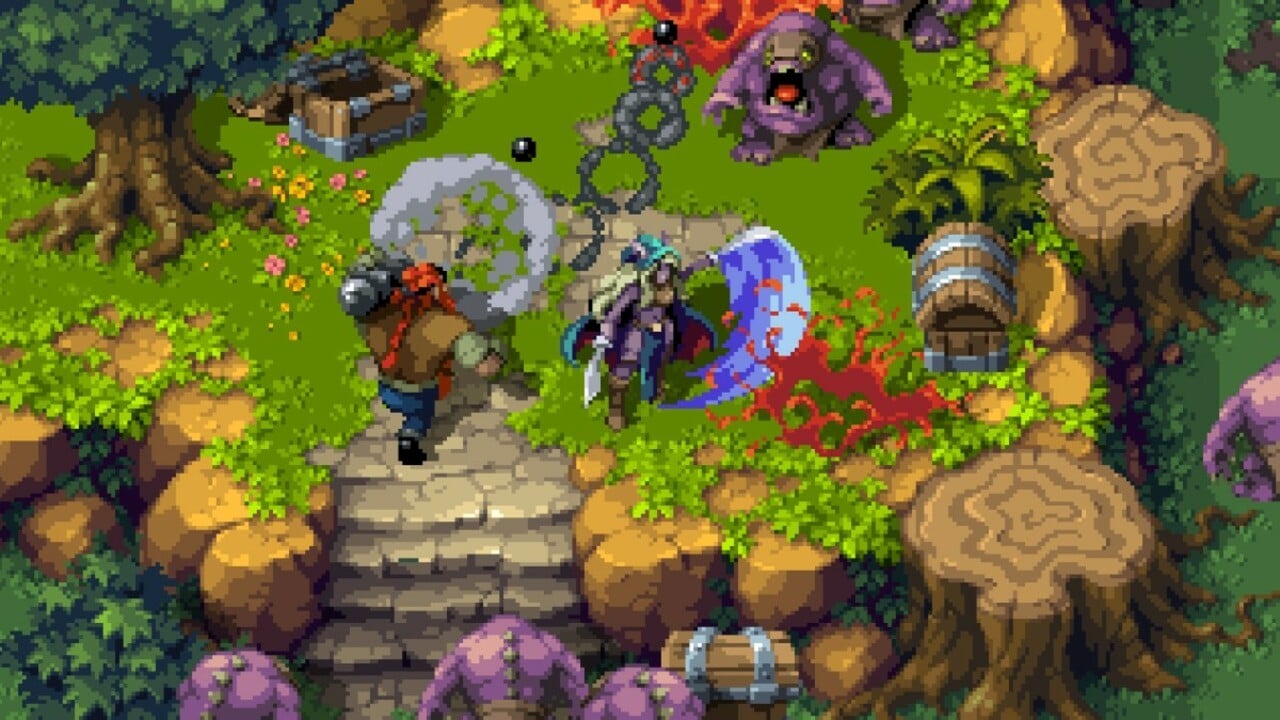 Update: Battle Axe is officially Switch-bound as the Kickstarter campaign has reached that particular stretch goal. It has raised over £45,600 at the time of writing. 9 days of funding time remain.

Original Story [Wed 29th Jan, 2020 13:00 GMT]: Yesterday we saw a rather tasty looking project launch on Kickstarter inspired by classic arcade titles like Atari’s Gauntlet and SEGA’s Golden Axe, and given the team’s heritage and sheer gorgeousness of the art, we thought we’d share it with you lovely lot.

As you can see from the campaign trailer above, Battle Axe is a top-down fantasy arcade-style game with hectic hack-and-slash gameplay that the makers hope will “revitalise the genre with new gameplay elements, improved controls, amazing pixel art”. As you’d expect, it has solo or local multiplayer and you’ll get a choice of three heroes to play as you battle through hordes to take on evil sorceress Etheldred, a ne’er-do-well who’s making life miserable for everyone in your homeland of Mercia.

The game is being helmed by veteran pixel artist and designer Henk Nieborg who has such lookers as Shantae: Risky’s Revenge, Contra 4, Shakedown: Hawaii and Xeno Crisis under his belt. Veteran programmer Mike Tucker, most recently of Xeno Crisis fame, is on programming duties and Nieborg has also enlisted the talents of Manami Matsumae – who you’ll know from her work on Capcom classics Mega Man, Final Fight and many more – to compose the entire soundtrack.

Battle Axe has been in development for a while now and is expected to have “another six to nine months” left until completion, subject to the successful Kickstarter:

Currently the game is at the alpha stage, with the basic combat implemented, as well as some simple enemy logic, item usage, and the first boss encounter. We’ve also put some work into the hero selection screen and UI, so there is already a decent amount of the game’s structure in place. The tilesets for the first two areas are now complete and most of the enemies for those areas have also been drawn, along with the vast majority of the hero animations, which are the most time consuming of the sprites to tackle.

The campaign page is full of animated sprites and details about the story – it’s one of the most polished productions we can remember seeing on the crowdfunding site. Nieborg also states that he has found a partner for a potential physical release on Switch and PS4 and provides the following mock-ups:

At the time of writing the project is one quarter funded, with just over £10,000 of a £40,000 goal and 29 days still to go. A £15 pledge gets you a digital download key for the platform of your choice (Switch, Xbox One, PS4, PC, Mac or Linux) while a physical edition for Switch or PS4 costs £25. There are obviously a bunch more bonuses and goodies, but those are the most pertinent tiers. Check out the Kickstarter for more information if any of the above sounds interesting. We reckon it looks like a rather spicy meatball.

Earlier this week we looked at a whole bunch of modern Switch games which fire up our nostalgia – this one looks like a candidate for that list. Let us know what you think and if you’ll be backing it below.

Are you prepared to receive forbidden Jason Statham knowledge?
New Book About BioWare’s 25-Year History to Feature Insight on Canceled Projects
Destiny 2: Season of the Worthy – How to get the Fourth Horseman Exotic Shotgun
Best gaming monitor deals of the week – March 27th 2020
The Smoking Barrels Weapon Pack fires shots at theHunter: Call of the Wild