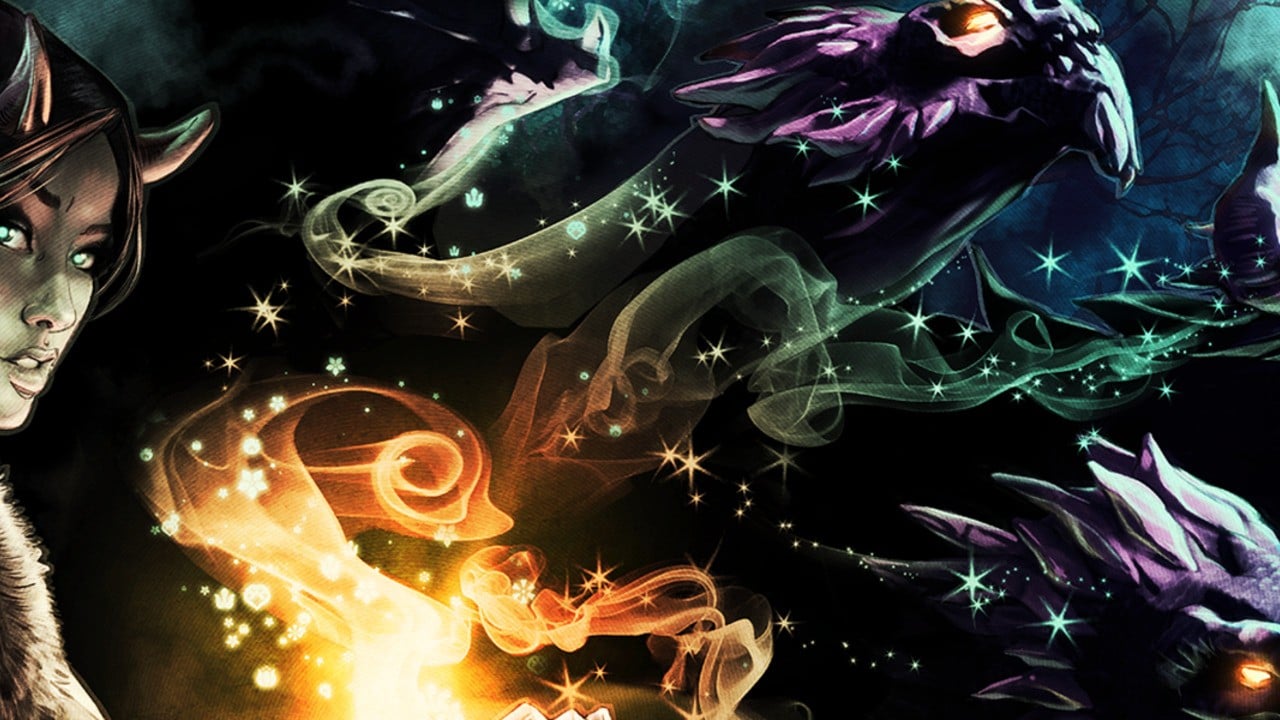 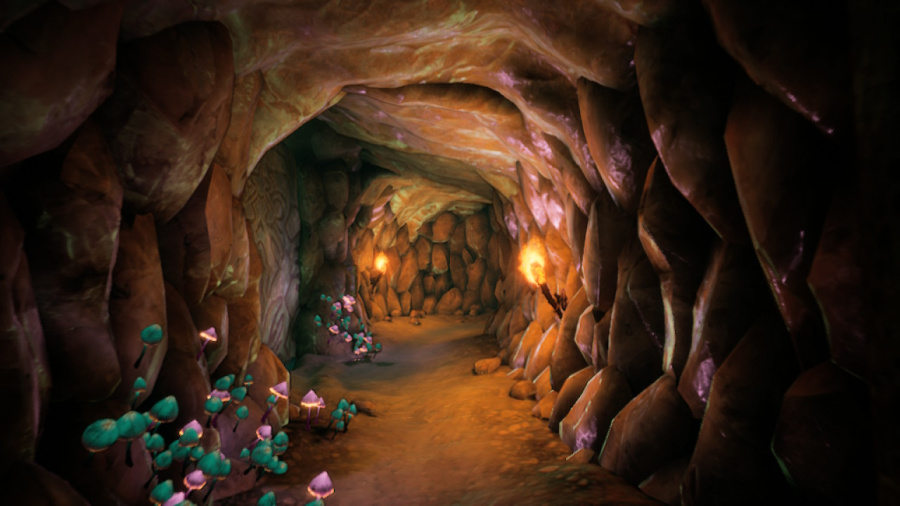 Zen Studios’ Operencia: The Stolen Sun doesn’t really get off to the brightest of starts on Nintendo Switch. Opening with a prologue that sees you assume control of King Attila and his wife Reka as they attempt to close a portal between their land and the underworld, things kick off here with a ten-minute introduction that highlights a few of this port’s niggling technical issues, namely a slightly blurred image quality with regards to enemies during battle and a lack of motion controls that can make some puzzles a little finnicky to interact with. Persevere through this very short sequence, however, make peace with the aforementioned negatives, and you’ll be handsomely rewarded with a rich and satisfying dungeon crawler that strikes a sweet balance between engaging story, meaty combat, addictive treasure hunting and clever puzzles.

Once you’ve managed to get the somewhat janky prologue out of the way you’ll be briefly whisked through a character creation suite and then quickly plonked in the ruins of a sunken castle for some good-old fashioned dungeon-crawling action. Gameplay here will be familiar to fans of the Bard’s Tale series, in particular The Bard’s Tale 4 which modernised the franchise’s traditional old-school gameplay mechanics by introducing the much more freeform style of traversal and camera controls that you’ll get to grips with here. 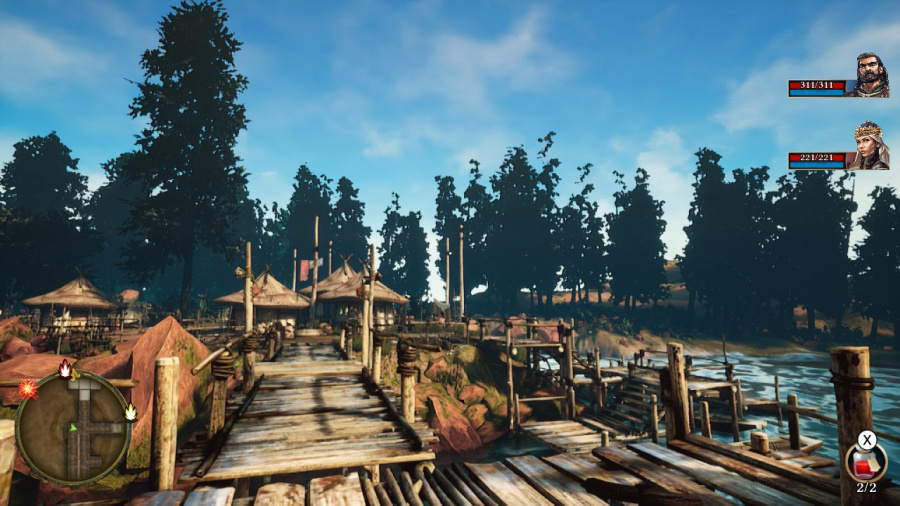 In Operencia: The Stolen Sun you and your party move around dungeons and all other areas of the game world as a single unit from an entirely first person perspective. Traversal takes place on a grid-based system with only four directions of travel but with full control of the game’s camera for engaging with your surroudings. You’ll make your way around sprawling dungeons, uncovering their intricate maps bit by bit as you carefully inch forwards, avoiding various environmental obstacles, solving puzzles and battling with the many beasties you’ll encounter as you go. Instead of random encounters, enemy engagements here can be avoided or instigated – for the most part – at a time of your choosing and sneaking up on your foes will see you ambush them, giving you a welcome stat boost in the combat encounter which follows.

That combat is pretty much par-for-the-course for the genre, a turn-based affair which sees your party of four fighters engage the enemy with a wide variety of melee, ranged, magic and AOE attacks, being careful to manage health and energy bars and applying buffs and healing where necessary to see you through. Arenas are three layers deep, signified here by coloured lines on the floor, and attacks will be more effective if they match the range at which your target is positioned. Each character in your squad has an extensive skill tree to unlock which differs depending on which class they happen to be and XP is gained by battling monsters, finding secrets and treasure, solving puzzles and completing various other tasks. After battles you’ll rest up at campfires to heal, level up, create potions – in itself a very satisfying little minigame – and buy weapons and armour from a merchant. 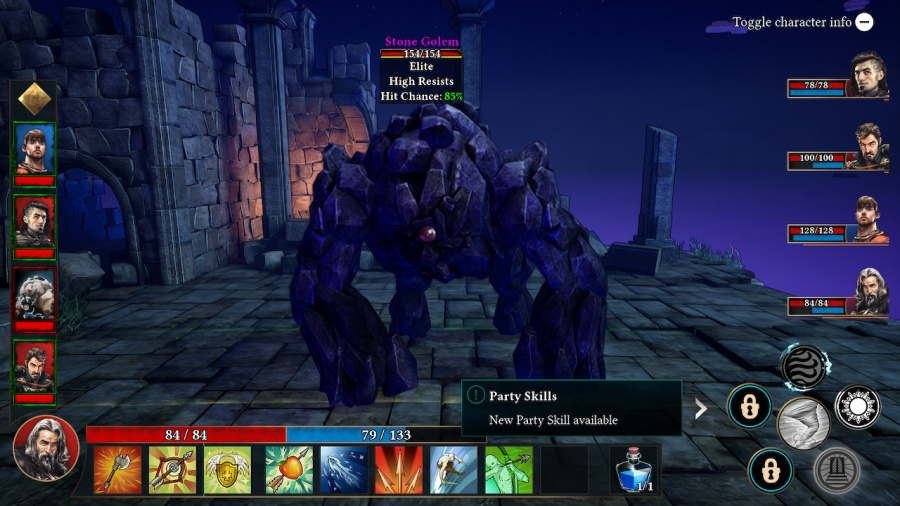 If it all sounds pretty run of the mill, well, on a basic level it is, there’s nothing in the moment-to-moment gameplay here that will come as a surprise to any fan of this particular sub-genre. However, where Operencia: The Stolen Sun really elevates itself is in a story that’s steeped in fascinating Hungarian folklore, a fun cast of characters who constantly banter back and forth as they go about their business and a series of really well-designed and engagingly atmospheric dungeons that strike a nice balance with how they mix their combat, puzzling and treasure hunting.

Indeed, it’s in the little details where Operencia: The Stolen sun really shines. The voice-acting here, for example, may a bit of a mixed bag but it’s saved for the most part by some fun writing that sees your companions constantly wise-cracking, spinning yarns and having a laugh at each other’s expense as they creep around corridors and battle bad guys. In combat too, enemies have been beautifully animated with a ton of detail in how they move, fight and react to being punished by your attacks – we love how skeletons will occasionally lose their concentration and drop their weapons during battle – and your various magic and AOE attacks are all accompanied by plenty of screen-filling explosions and environmental effects. The combat here is satisfyingly meaty and, although it can occasionally be a little bit monotonous against bog-standard foes, it’s mostly pleasingly strategic and provides plenty of moments where you’ll need to pause and carefully consider your options if you’re to make it through, especially when it comes to the many excellent boss battles that are dotted throughout dungeons. 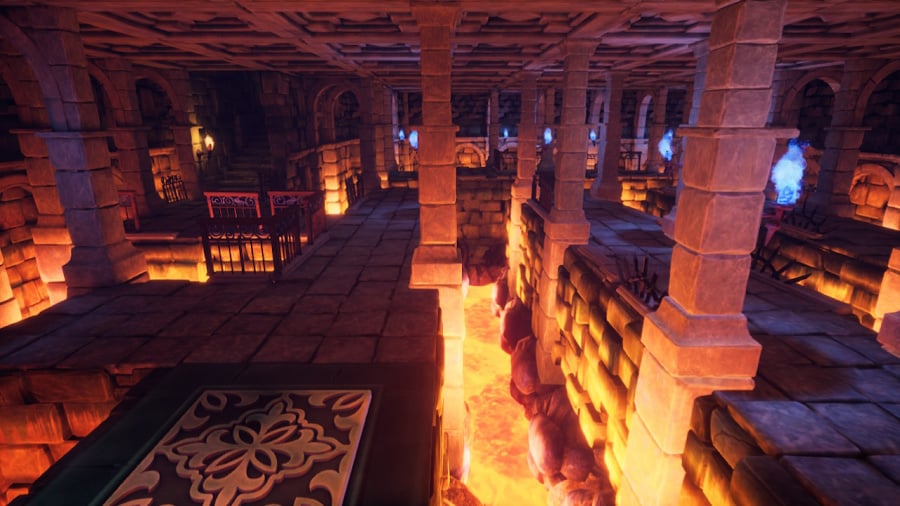 Puzzling, too, is pretty much uniformly excellent with a good level of variety in the many challenges laid before you as you make your way across Operencia. You’ll need to put the vast array of tools you collect on your journey to work in order to unlock magical doorways, traverse booby-trapped rooms or broken bridges and operate all sorts of mechanical devices that block your path. On more than one occasion we had to bust out a notepad and pen to help us work out how to solve certain brain-teasers and, overall, the game does a very good job of ensuring that it properly challenges you without sliding into frustrating territory. Dungeons also tend to build towards a satisfyingly tough climax each time with boss battles that’ll force you to employ all of your latest attacks and skills usually preceded by some puzzle element and/or miniboss to really keep you on your toes.

Across the roughly thirty-hour campaign here, as you battle to save the kidnapped Sun King Napkiraly by retrieving King Attila’s legendary sword, you’ll engage with a cast of characters plucked from both the pages of history and traditional Hungarian Folklore in a story that’s impressively strong for this type of game and, although it does begin to run out of steam a little in the second half, it’s an entertaining ride that does a fantastic job of framing all the juicy dungeon crawling you’ll get up to in your epic quest.

One thing we would advise as you play through Operencia: The Stolen Sun is that you take your time in each of its levels, investigate your surroundings fully and hoover up every secret and piece of treasure you can find. There’s a wealth of weapons, armour and important recipes to be found as a reward – you can have quick check in your game map to see how much of each area you’ve completed – and doing so will see you level up and avoid missing items or running into a brick wall – as we did – quite early on against some boss or other who you’re just not ready to face. The game also includes a fast travel system which is unlocked four chapters in and is brilliant for returning to earlier dungeons when you’ve unlocked some new traversal options that let you access previously out-of-bounds areas – yes, there’s even a little touch of Metroidvania here. It’s also a good idea to make multiple saves just in case you get completely stuck or find you’ve made the wrong choice somewhere along the way – we’re speaking from bitter experience here. This is a game that rewards thorough exploration of its excellent levels and can really punish you in big battles if you’ve rushed things along – Queen Reka, we’re looking at you. 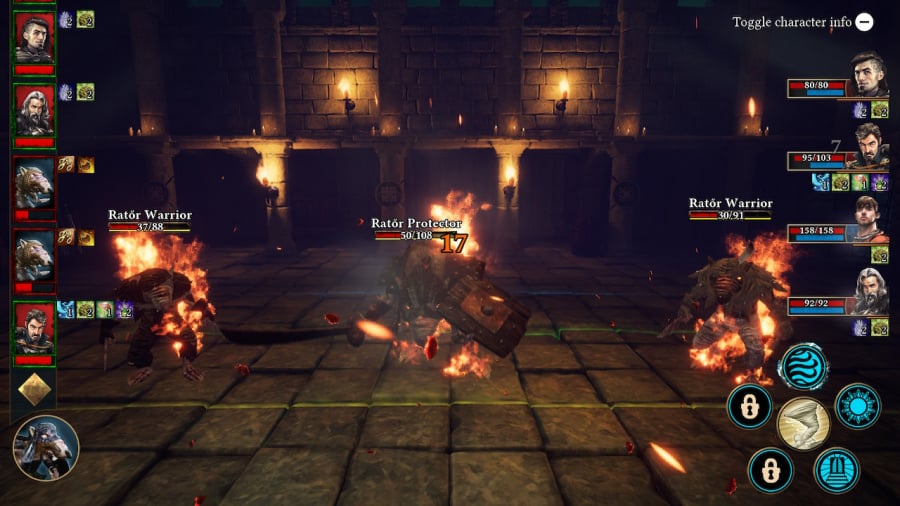 In terms of this Switch port, as we mentioned there are a handful of niggling issues with the resolution getting a little blurry from time to time during busy combat encounters and we really, really wish motion controls were an option to help fine-tune our movements when trying to place small objects or interact with some finnicky part of the environment. Touchscreen controls are included here but we found them much more of a hassle to use overall than sticking with a controller.

Beyond these minor inconveniences, however, this is a fine port. In both docked and portable modes loading times are short, the framerate never stutters, we didn’t encounter any bugs during our playthrough and the game looks and sounds excellent for the most part as you make your way through its many dungeons. It may not look quite as sharp as the Xbox One version but we reckon that’s a trade-off more than worth making in order to have this game available to play in portable mode where we can dip in and out of its labyrinthian levels at our leisure.

Operencia: The Stolen Sun is a mostly excellent first person, grid-based dungeon crawler that’s brought brilliantly to life via an engaging story, fun cast of characters and some well-designed and hugely atmospheric dungeons. Combat here is satisfying and puzzles, for the most part, land just on the right side of challenging. If you’re looking for a meaty old-school dungeon-crawling adventure with a ton of secrets and treasures to find as you make your way across its world, this one comes as a nice surprise and is highly recommended.