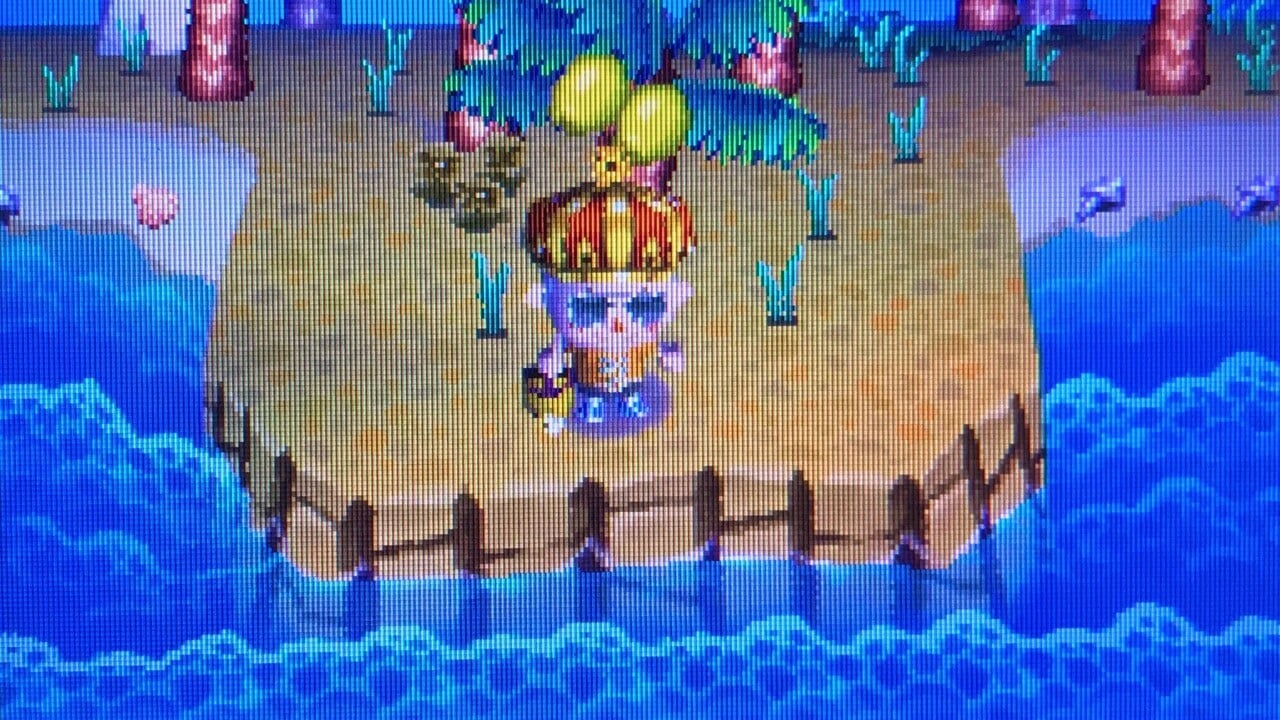 Was it Jack Reacher or someone else who said “Never go back”? We forget, but when it comes to video games, nostalgia trips can be a disappointment. Some gems hold up beautifully, while others are irreparably tarnished by Mother Time and Father Progress and can’t measure up to your treasured memories. Old games, fondly remembered, may also be tied up with people and places from your past that the game alone can’t replicate. Some things are best left alone; gone, but not forgotten. Our last several weeks have been occupied playing Animal Crossing: New Horizons. We’ve been making ourselves at home on Tom Nook’s getaway island, meeting new villagers and grinning from ear-to-ear when we see familiar faces. We’ve had the good fortune of reuniting with several villagers we used to know, and catching up with old friends has been a big part of the experience.

Still, our memories of Animal Crossing: Wild World (the Nintendo DS entry and this writer’s first encounter with Nintendo’s sedate life sim series) are clouded with nostalgia. Our time with the game back in 2007-2008 was intense–an 18-month period where we played the game every single day–and it left behind an enduring affection, but the details are hazy now.

For several reasons, we haven’t fired up the game in the time since, so in the interest of ‘Science’ and finding out how the 15-year-old version of Animal Crossing compares to the lovely, shiny New Horizons, we decided to finally revisit our old stomping ground. We wanted to refresh our failing memory, catch up with (very) old friends and see how the old place was holding up after over a decade of neglect. Still, we couldn’t shake the feeling that going back might be a mistake.

Only one way to find out.

We powered up our DSi–an upgrade over the white DS Lite we originally player on–and heard that calming, charming theme once again before being presented with our bedroom:

The first thing to address was the elephant in the room, or more accurately, the ex in the room. The top floor of our house has two beds, one of which belongs to somebody we haven’t seen or spoken to for a long time now. In all honesty, that’s the main reason we never went back before now.

Time tends to paper over cracks, though, and many things have happened in the intervening years. We can now hop over the mental barrier that had previously blocked our curiosity to revisit the game. It’s sobering, it’s a little melancholy, but it’s fine.

As the village loads, we prepare ourselves for the worst. Remember in Ocarina when Link steps out of the Temple of Time to find Hyrule Market Town in ruins with shambling Redead groaning in the square? In our mind, that is what awaits us.

However, when the village finally loads, we step out our front door to find a rather cheerful ruin. It’s very early in the morning and we’re greeted by cloudless blue skies and the light-hearted 6 AM tune (soon followed by the whistling 7 AM one) that makes everything seem less forlorn.

As predicted, weeds stretch across Dibly from cliff to coast. Nature has taken over the town, and it reminds us of heading to our local park recently after two months of COVID-19 closure. The flowers are mostly gone, save for a few dried pansies that crumble to dust as we walk through them, but our resilient golden roses remain. Rotten acorns cover the ground (leftovers from an Autumnal festival, if memory serves) but the trees are laden with fruit and a brilliant blue sky has us imagining a full-time return; a little side-project away from our deserted island on Switch to whip Dibly back into shape after a decade away.

Our mailbox is dinging and we’ve got two letters: one from the Happy Room Academy (74,249 points – not bad!) and a second from the Post Office informing us of the 99,999 Bells of interest earned during our absence. Zoink!

Where are we? When are we?

The first thing that jumps out after going back to this 15-year-old game is the framerate; silky smooth it ain’t. Going from 30 fps to whatever this is is jarring, at least at first. We soon acclimatise, though – it’s somewhere in the region of 20 fps, which sounds interminable, but for this type of game, it’s entirely serviceable. 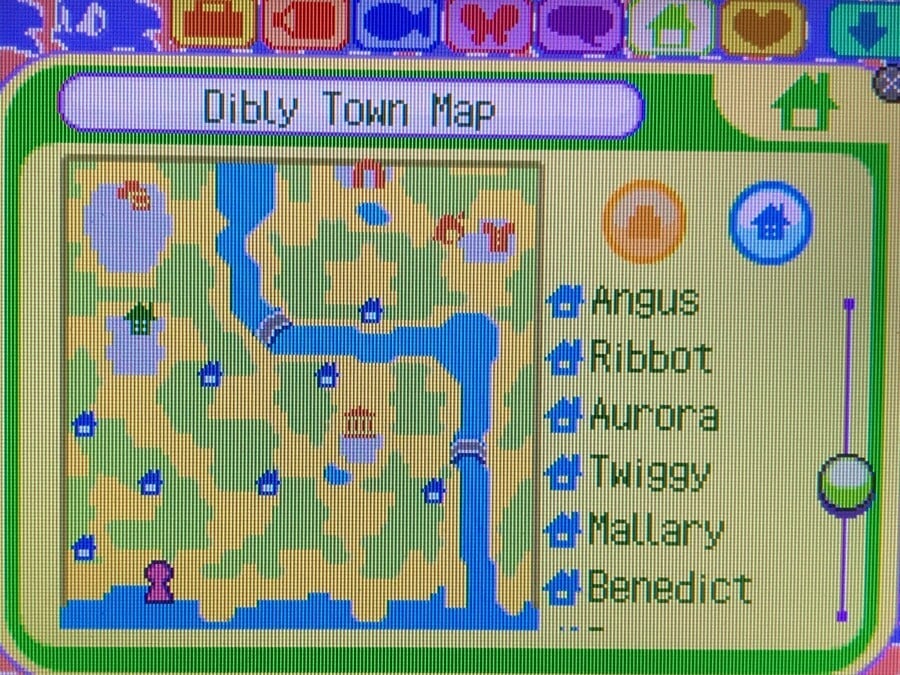 Dibly’s exact geography is hazy in our mind (it’s been a while), so we pull up our map – easily accessed using the stylus on the touchscreen. Control-wise, Wild World is still a joy and although you can play using buttons, we’re touchscreen all the way.

A list of names denoting the residents’ houses on the map immediately fills us with joy, and a little confusion. Stalwart favourites like Aurora and Twiggy–one of our first and favourite residents–are unforgettable, but who the hell is ‘Mallory’? Must’ve moved here just before we abandoned the place.

Closing the map, we’re about to start exploring the village when we spy movement…

Aurora, who coincidentally has just moved to our island in New Horizons, is out fishing. She doesn’t recognise us, but after exchanging pleasantries it’s like we’ve never been away. She wants to race us to catch a crawfish, but we turn down her offer and feel bad afterwards.

Dora is another resident who also happens to be on our New Horizons island, so we head to her house and find all her things in cardboard boxes ready to move. We persuade her to stay, although we’re not sure why. Dora’s fine, but until we saw her again, we’d actually forgotten we’d met her before. Animal Crossing has always done a great job of making you feel bad for shunning characters, so our guilt must have kicked in and stopped her from leaving. We know it’s common practice to socially engineer your population, but that always felt a bit fascist for our tastes.

Oh, we’re not beyond leaving fossils that resemble turds outside Curlos’ house and responding in the affirmative when he asks if moving is a good idea, but we’re not gonna grass him up to Resident Services just because he’s an arrogant, inconsiderate, unthinking sheep! We should really learn to get along with those types.

We soon catch up with Ribbot and Twiggy, although the other villagers are still sleeping. Disappointingly, the noticeboard by the Town Hall is up-to-date with recent messages. We missed La-Di-Dah Day at the start of the month, apparently. And Yay Day before that – too many events to count.

Pelly gives some harsh feedback regarding the absolute state of the town before we run into Saharah who asks us to deliver a package to Blathers. How fortunate! We were just heading that way.