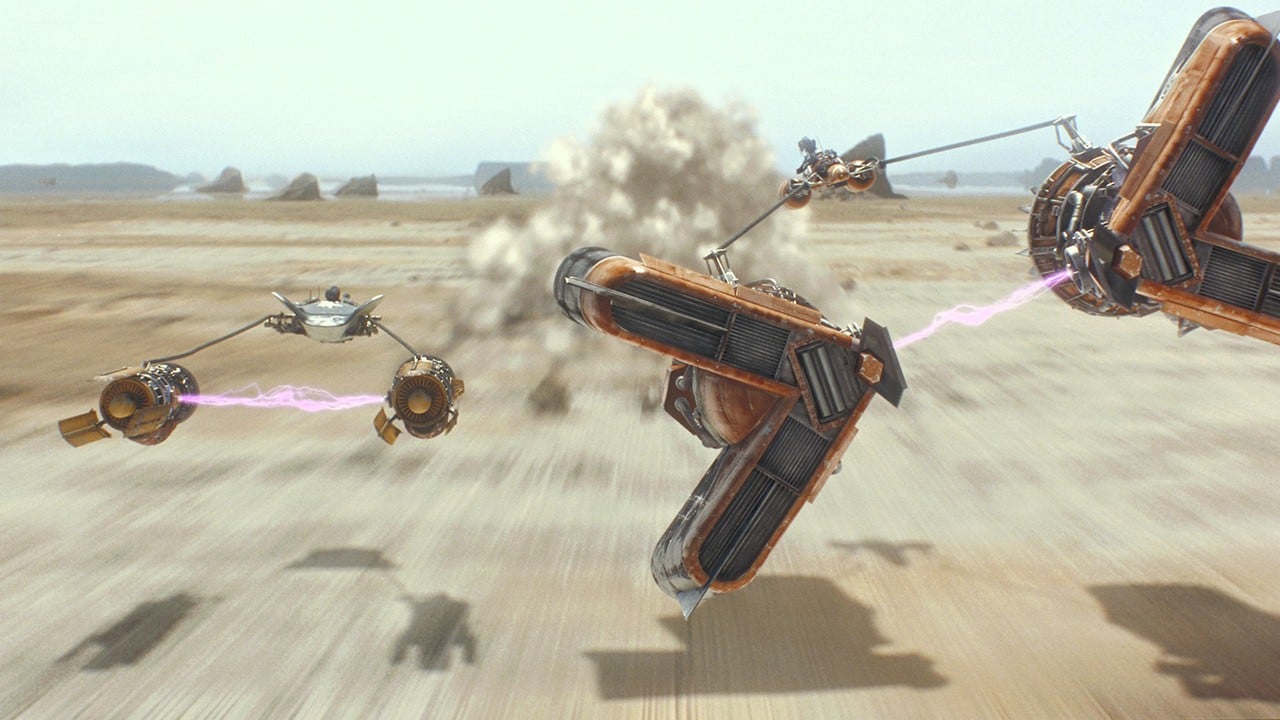 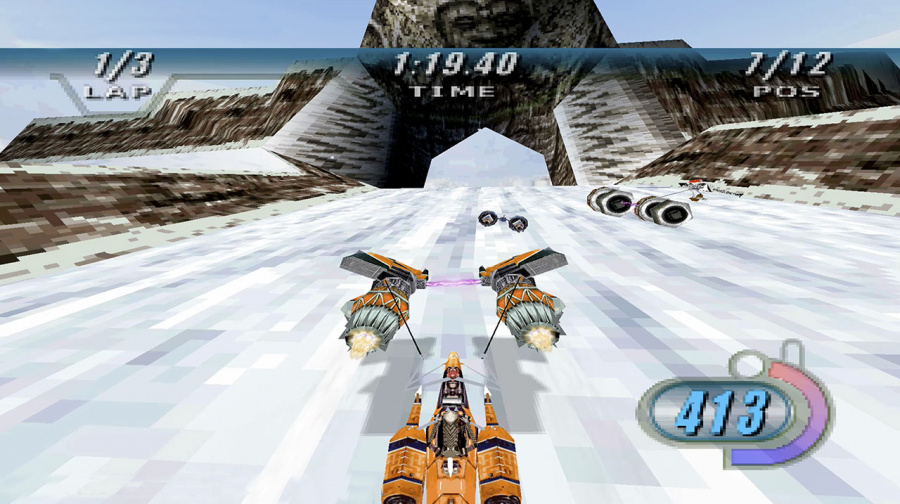 A long time ago in, erm, this galaxy, a game called Star Wars Episode I: Racer was a smash hit, leading to dozens of enthusiastic magazine reviews with the byline “now this is podracing!” Unfortunately, the intervening years have been unkind to the Star Wars prequels, but does that hindsight extend to this thoroughly literally-named racing tie-in? Thankfully, not quite.

Back in the N64 days, Episode 1: Racer was a clean, simple experience, largely elevated by its sense of speed. That hasn’t changed. The major difference in Star Wars Episode I: Racer on Switch is that the game runs at an unbroken 60fps, meaning that the already smooth gameplay is even smoother. This is pretty much the definitive way to race pods, with pin-sharp graphics compared to what you’ll remember – although the textures are still as blurry as they were all those years ago.

The song remains the same. Literally, with the astonishing John Williams score pounding through every race. And those races are gloriously arcadey, with wide courses full of obstacles, shortcuts and elevated alternate routes. It’s speedy, it’s exhilarating, it’s very Star Wars. There’s a little flavour of F-Zero about the proceedings, though nowhere near the level of challenge you’d get from Captain Falcon and crew. While we’re on the topic of it being evocative of classic Nintendo franchises, there’s even a tiny bit of Star Fox in the way you can rotate your craft to fit through narrow gaps. There are two flavours of control; a modernised scheme utilising the ZR button to accelerate, and an old-school one that’ll be much like you remember the game from the N64, but with the analogue stick in a slightly more sensible place. Unfortunately, neither is really ideal. To go at full speed you need to tilt the left stick forwards until a bar on the right of the HUD is filled, then hit the A button. This is awkward, but completely necessary to win all but the first few races. Over-acceleration, though, will overheat and damage your pod racer, so you’ll need to hit the R button to repair it where necessary. Sadly, the controls are only available in these two configurations and not remappable (besides at the system level, of course).

Between tournament races, you can spend your winnings in cheerful stereotype Watto’s little store to buy parts for your racer, from thrust coils to air brakes and everything in-between, allowing you to improve your stats. You can also buy busted parts from the junkyard at a discount, using your Pit Droids mid-race to repair them back to working order. These parts are also part-exchanged when you buy new ones, so there’s an economy to fixing up broken components for resale, adding depth to the game – though it’s pretty easy to exploit and quickly ramp up your abilities, simply by exiting and re-entering the menu with different characters until you find the part you need for a price you can afford. Shh! One somewhat troublesome system is the way the prizes actually work; you can wager the outcome of each race based on your performance – for example, winner takes all, or a prize pool goes to the first four racers. However, you can’t win money a second time by replaying races, so if you find yourself lagging behind it’s best to restart than to place in a low-winning position. This is a little counter-intuitive, and we found it dragged us out of the game a little bit.

There are plenty of unlockable racers to choose from after the initial eight, though the only one we recognised was the cheating Sebulba. The characters are generally very unbalanced, which means an online mode would require extensive effort to make viable – there’s no such multiplayer here. Only local is present and, to be frank, it’s not the most enticing prospect when Crash Team Racing Nitro-Fueled is right there.

Besides the single-player tournament mode (which can be beaten in a couple of hours), we found there’s not a whole lot of replay value here; while the base game is good and the tracks are varied (with plenty of shortcut potential), without an online mode there’s little incentive to get really good. The local play works fine but doesn’t hold a great amount of appeal compared with more contemporary titles, and the single-races and time trials are going to be an acquired taste. It’s not particularly difficult to unlock all the characters, either; you’re going to get them naturally as you place first in races.

The central loop of ‘race, win, upgrade, race’ is certainly compelling while it lasts, and if you have fond memories of Star Wars Episode I: Racer from your childhood this is as good a way to relive them as possible – just don’t expect any huge overhauls from the original game. Star Wars Episode I: Racer sets itself apart from the likes of Wipeout with its earnest take on the popular licence, and it’s still fun to relive one of the best scenes in the prequel trilogy, but it’s a long way from being one of the best racers on Switch.