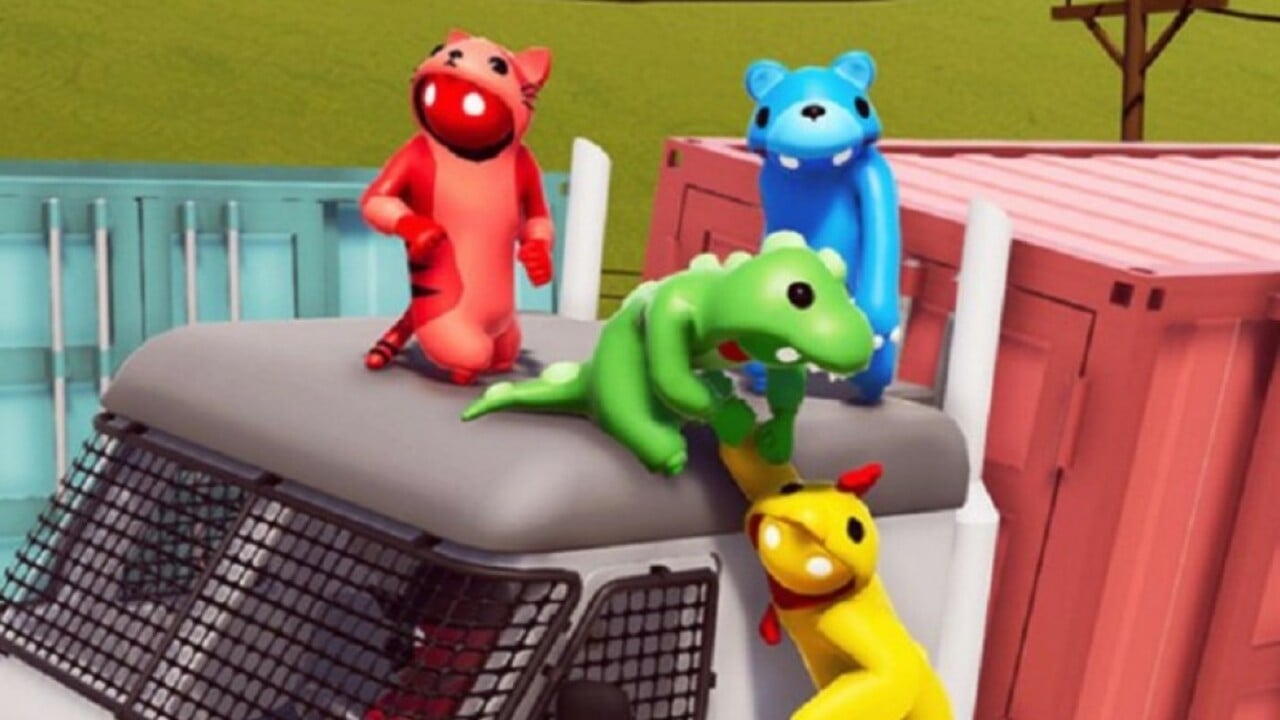 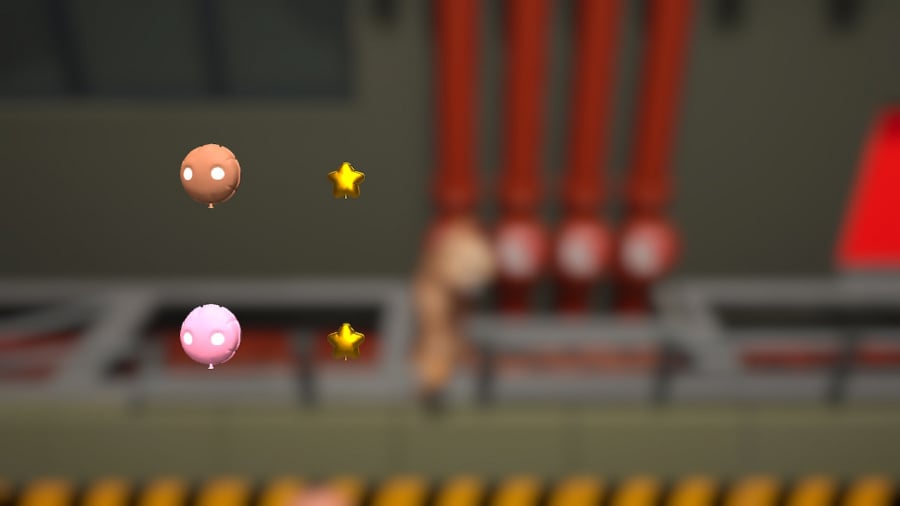 In the Party Game Hall of Fame, Gang Beasts is one of the OG big dogs, alongside Nidhogg, Jackbox, and Overcooked. Gang Beasts is a chaotic, wonky physics brawler that relies on the utter incomp-itude of its players to create mirth and merriment, and much like a massive chocolate cake or a puppy, it’s always been a huge success whenever we’ve pulled it out at parties.

It’s strange, then, that it’s taken such a long time to come to the Nintendo Switch. It was out in Early Access for years, beginning in 2014, and chances are that if you’ve played it, it may well have been that EA version. Four years after its official release on PC, Xbox One, and PS4, it’s finally reached the Switch — which we’d argue is the home of party games. (Of course we’d say that, though.)

Gang Beasts on Switch plays well enough. It’s not a particularly graphically demanding game, and everything, from its mechanics to its menus, is pretty simple. There are two options: Local Play, and Online Play, as well as various modes, including Melee, Gangs, Football, and Waves. 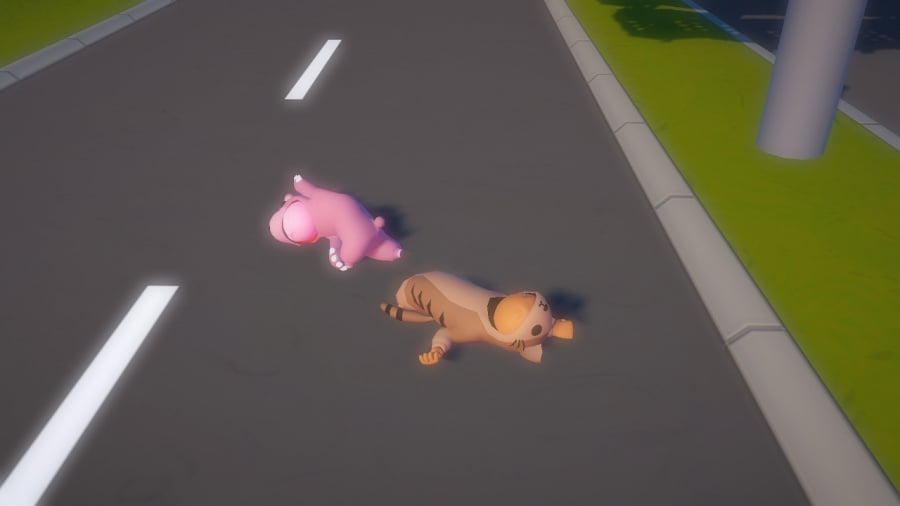 Melee is what you want, though. It’s why people love Gang Beasts so much: the floppy ragdoll punching that skyrocketed this bone-free game into the public eye. Each level has various obstacles — from meat grinders to, er, massive flaps in the floor that keep being opened by large, falling sausages — and the game is more about constantly avoiding these perils than it is about fighting. You can, of course, punch, kick, and headbutt your opponents, knocking them out and giving you a window of time in which to lob them into said obstacles, but you’re just as likely to accidentally fall onto train tracks, or off the scaffolding, yourself.

Most matches end because people struggle to keep their jellyboys upright, let alone managing to punch anyone else off a ferris wheel. The winner is often, by default, the only person who didn’t trip over their own feet — but that doesn’t make it any less fun in Local Play, because the fun is the chaos. It’s more about laughing at the ridiculous wiggling bodies and their ineffectual floppy headbutts than it is about the skill required to actually be good at the game, and that’s fine by us.

But that does mean that Gang Beasts doesn’t really work as well as an online multiplayer game. Without voice chat, which is not really one of the Nintendo Switch’s strengths, Gang Beasts is a frustrating game about fighting unruly physics with a bunch of silent strangers. Sure, you can get a third-party app for voice chat, but that sort of defeats the point of a party game — although no one’s really having parties right now anyway, which isn’t Gang Beasts’ fault. You can invite people, but they have to already be on your Switch friends list, which is admittedly pretty standard. 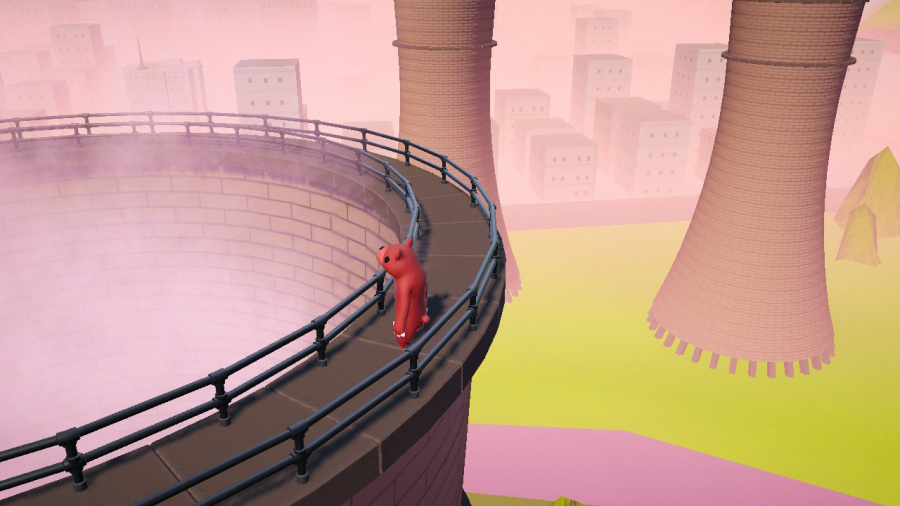 We rarely got more than two other people in our matchmaking attempts, so the matches were somewhat subdued as well as silent, but the connection seemed good, and the latency was perfectly fine. There’s not much point in dinging Gang Beasts for offering an online mode, because the online mode works as it should, and it’s there for people who want it — we just found it a bit dull with strangers, is all. As for the Gangs and Football modes, we never actually matched with enough people to make them work, so we can’t really say how good they are.

But the Switch is a natural home for Gang Beasts local play, if you have enough controllers. You can change some of the settings to determine how many wins you’ll need to be triumphant, as well as what colour your character is, what costume to wear, and what stage you want, but ultimately, Gang Beasts keeps things very simple, with developer Boneloaf seemingly aware that they struck gold with the mechanics and don’t need to dress things up too much.

The wrapper around the game is, as a result, very barebones. There are just the Local, Online, and Wireless (for local play with multiple Switches) options, plus the Costumes wardrobe, Settings, and Credits. Disappointingly, the Settings are also sparse, with volume controls, language options, and whether or not to turn vibration on. Button remapping and colourblind options would be welcome, but aren’t available. 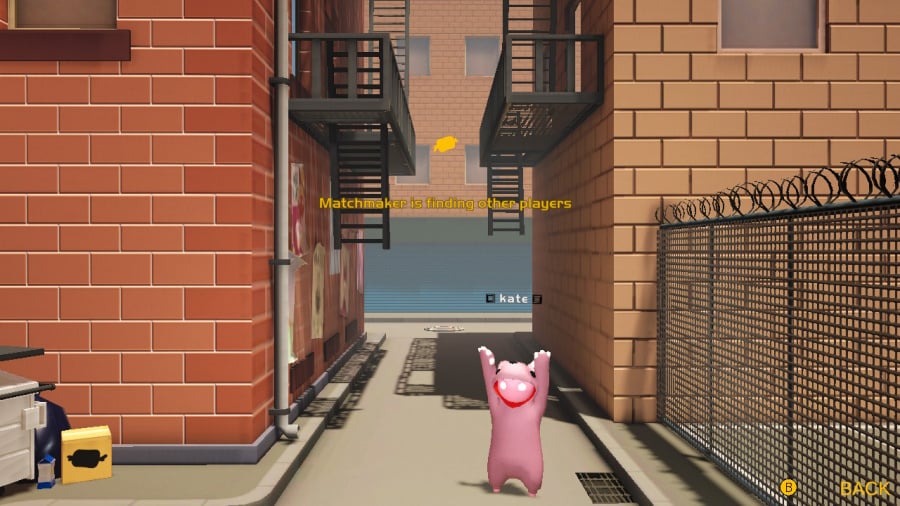 The Costumes, on the other hand, are plentiful, from licensed Rick and Morty outfits to the adorable bear, dog, and cat onesies. They don’t add anything to the game mechanically, other than being to identify your player, but they are cute.

With all of that said, though, there are two questions to be answered: Firstly, is Gang Beasts still a good party game, and secondly, is it worth getting on Switch? The answer to the latter is “yes” — it runs well, and it’s the Gang Beasts experience you’d expect, but more portable.

The answer to the former is a little more complicated, because the whole point of Gang Beasts is that it’s scrappy and janky, and… it still is. There’s not a huge amount of polish, honestly — which is part of the appeal — and perhaps you don’t want to pay 25 quid for a game that still looks like it came out in 2014. Only you can answer that question. If you love Gang Beasts, and don’t mind paying 20-30 currency units for the chance to have a portable version, then go get it already.

Gang Beasts’ charm has always been its janky, unpredictable, chaotic physics brawling, and you’ll either be pleased or disappointed to know that it hasn’t changed too much since 2014. On Switch, it runs well in Local and Online mode, although the Switch’s voice chat options make the latter a less appealing choice. If you’re a fan of portable party games, though, this is a classic not to be missed.

The Uncharted movie trailer has leaked – and it looks pretty authentic to the games
‘Bloody Rally Show’ Skids To Switch In November, Mashes Top-Down Racing With Reality TV
How to upgrade to Windows 11
Can’t Find Dying Light On The Switch eShop? It Might Be Because It’s Currently Banned In Germany
PS5 Was the Best Selling Console in the US in September 2021, Breaking a 33-Week Streak Held by Nintendo Switch